Motorists get unacceptably poor service from garages and some work carried out can be potentially dangerous, according to a report.

It also says 40 percent of garages are providing a "critically unsatisfactory" service and that the poor quality of much of the work done by mechanics could be putting lives at risk.

The following are statements received from The Office of Fair Trading:

My car needed some work done for its MOT. There were a couple of "fail" points and a couple of "advise" points - one of which was the rear exhaust was "starting to rust and could go anytime". At the time I couldn't afford a new exhaust so decided to run with it until it failed, which turned out to be almost a full year later.

I just had my car repaired...they replaced the clutch cable. Fine I thought until I drove it...coming home from work last Friday the car overheated all the red warning lights went on...when I called out the AA they said the garage simply hadn't pushed in one of the connections to the fan!

As an Engineer it always amazes me what garages are prepared to try on when my Mother takes her car into the garage. The only thing I can suggest is to get someone reasonably knowledgeable to give their opinion, although modern cars are so complex sometimes even the manufacturers don't understand them.

I had a set of brake pads changed on my Land Rover. They lasted less than a month! When I challenged the garage, they denied ever seeing my car, or doing the work! The garage was paid in cash, so it was hard to prove anything. I now use a trusted local garage who has a good reputation. The only advice I can offer, is go for recommendations on garages, before getting work done!

The worst and most unregulated and incompetent industry has finally been revealed. The whole motor repair industry should be licensed like most other major industries with undercover 'test' cars brought in for repair anonymously to check the garages competence. Car repair is the biggest open-cheque rip-off sham in existence. No wonder that manufacturers are designing cars that need less and less servicing.

Mechanics know what their job is - they can tell when they can fool someone and when they can't. My wife will not take her car to the garage as she thinks (quite rightly) that as a woman the mechanics will just try to get as much from her as possible, while doing as little work as possible.

Garages do over charge for work and as the quality is never guaranteed, there is no come back. There should be a star approval system for all garages so that we can compare them (like we can now for hotels and B&B).

Quality, workmanship, service and price are things that should be measured and inspected on a regular basis. An informed public can then make comparisons, so that garages do not get away with dodgy work, which is overly priced. 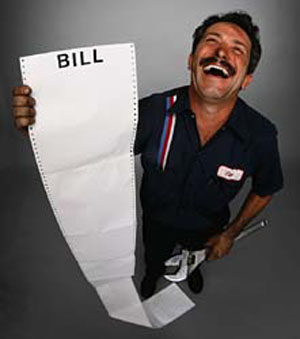