Applied to the 650S, 'Super' seemed like a limp sort of word for what was a blazingly fast coupe with a 0-62mph time of three seconds dead, a standing quarter mile time of 10.5 seconds (at 139mph) and a top end of 207mph. Impressive stats by any standard, until McLaren itself established a whole new benchmark three years later at the 2017 Geneva show when the second Super Series generation was kicked off by the 720S (internal code P14). The new car was 91 per cent different to the 650. Its new and stronger carbon fibre Monocage II body structure was around 18kg lighter and, as the larger model number suggested, it had more power too from a stroked 4.0 litre M840T version of the previous car's 3.8.

Anyone who had experienced the might of a 650S at full chat probably wouldn't have put 'more power needed' into the 720S suggestions box but supercar expectations never go backwards, do they? Almost more impressive than the additional 70hp that McLaren packed into the 720's new motor was the ability they gave it to handle that extra poke. Even though it was nearly 90kg heavier than the 1,330kg 650S, the 720S still managed to turn in better performance figures than its predecessor. The 0-60mph time dropped easily into the mystical two-second zone, 0-100mph came up in a frankly bonkers 5.6 seconds and 0-124 in 7.8, while the standing quarter mile time of 10.4sec was only 0.2sec slower than that of the underwear-moistening P1. Zero to 300km/h (186mph) was dealt with in under 20 seconds, while top speed was hoisted to 212mph. Because why not?

A 720S Spider version was launched at the end of 2018. Mechanically it was identical to the coupe and the tub chassis meant that no body stiffening changes were required either, but the retractable hardtop kit with its scaled-up Swiss watch raising/lowering mechanism did add nearly 50kg to the weight. Despite that, with no power shortage to worry about, there was no degradation in the 0-62mph time, which matched the coupe's at 2.9sec.

Then again, neither of those Italian offerings boasted the 720's dihedral doors. Nor were they 'hand assembled in a tranquil environment where creativity and excellence thrive', words from the peculiarly written 720S brochure with all the excess full stops removed for easier reading. Most importantly, these rivals were both heavier and less powerful than the McLaren. One well respected UK magazine put the 720S at the very top of a list made up of luminaries including the Ferrari 488, Ford GT, and Lamborghini's Aventador S and Huracan LP610-4.

Let us help you make that dream come true 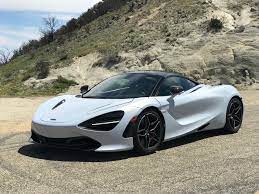